My story about finding the stories

Before telling the stories that are found in my book, I thought I would share a bit about my journey of discovery of the narratives of Christian Perfection among the early Methodist people. Witnesses of Perfect Love is primarily research I completed at Regent College. I didn’t set out to write on narrative, or even about the lesser known early Methodist people. My journey began with questions about the Methodist doctrine of Christian Perfection. Questions about what exactly John Wesley taught, and why his teaching seemed so foreign today — even in churches who claim the Wesleyan tradition. As I began to read the theology and John Wesley’s arguments I became more confused. Wesley said many things, in many different context over serval decades about the doctrine of Christian Perfection, and his comments don’t appear to be consistent. I couldn’t help but think that there must be more going on during this time period than I was grasping.

Then one question led me out of the fog. Since Wesley himself did not claim to have experienced Christian Perfection, is there anyone else I could investigate that did claim Perfection? What do they have to say about the experience, rather than the theology? This question led me to the narrative of William Hunter, then his intriguing story led me to seek out others.

I fully intended to address my original questions, but as I dug deeper and talked to others about what I was finding (or rather the people I was discovering) it became clear that the stories of early Methodist Perfection was central to understanding the ideas. The people who held to these beliefs were essential to understanding the ideas themselves. I see now that my attempt to take the idea of Christian Perfection out of its eighteenth-century context of the narratives, led to my confusion.

As I think back on the journey of writing this book, it is the people I encountered in history that stick out. I discovered a letter written from Sarah Crosby to John Wesley, where she is reflecting on her own experiences to talk about the doctrine of Christian Perfection — narrative theology though before that jargon existed. In my research notes I recorded the content of the letter then I wrote: “is there more of the story in writing?” Highlighting it in red so I would come back to it. I did indeed find more to Sarah Crosby’s story (more on that in a later blog post) and I fell in love with Sarah’s spunkiness. She shared her experience and opinions, even when it meant correcting John Wesley or telling him she found his sermon dull. 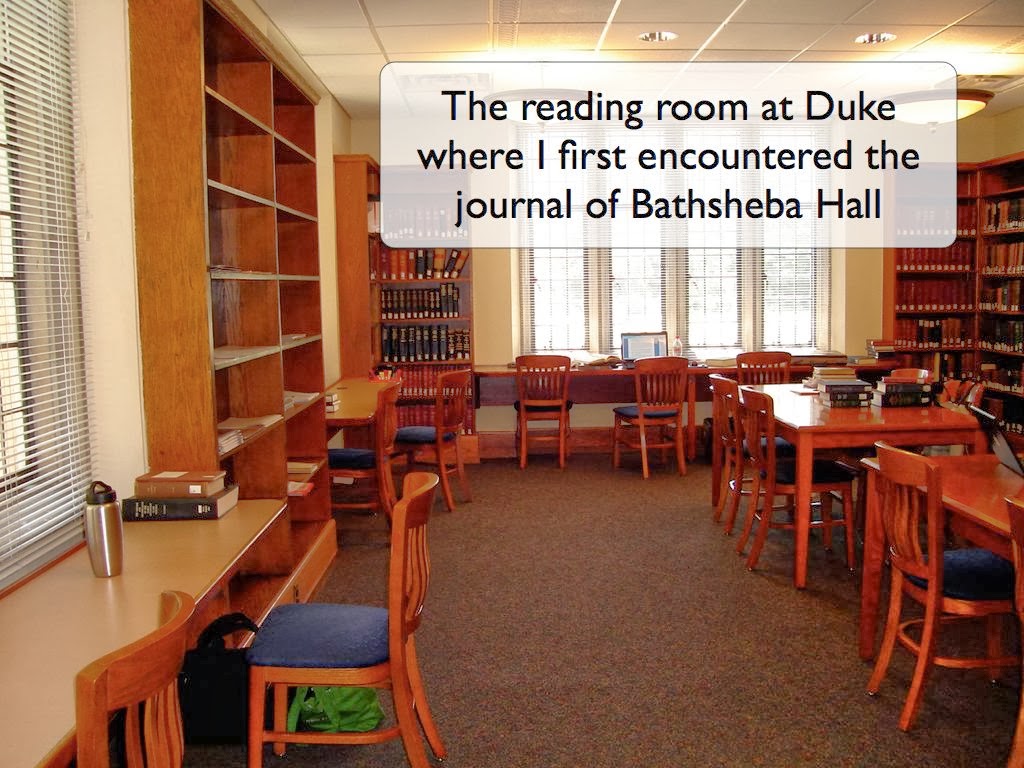 I discovered Bathsheba Hall while on a research trip to Duke University. I was using my time to dig through their set of the Arminian Magazine the periodical that Wesley himself published. I had found a few nice tidbits, but then in the January 1781 edition I discovered the beginning of the journal of Bathsheba Hall. I was particularly struck by the story Hall tells about reading her spiritual experience to a friend, who promptly fainted and woke up to say she had encountered God herself. What was going on in this woman’s life? I just wanted to know more! My memory of reading her account is vivid in my memory event 4 years later. As I sat in that library reading room I was taken outside of myself and into her story. I wish I had a picture of her, all I have his a photo of the reading room where we first met.


Stories have so much power to express more than just an idea of theology. The stories of real people hold layers and layers of truth that speak evocatively to how we live out the Christian life. How we think and talk about God. I was able to discover these particular stories, and I want to share them with a broader audience than the handful of people who have read my academic writing. Stay tuned for more on Sarah Crosby, George Clark, William Hunter, Bathsheba Hall, and possible others, too!
Posted by Unknown at 4:27 pm